Cast a spell on your Tea with Harry Potter Mugs, between each sip you can shout “Lumous!”, “Expelliarmus!” and “Accio!” pretending you’re the great wizard himself!

Harry Potter Mugs come in many designs based on the characters from the seven books and films by JK Rowling. The books have sold over 500 million copies across the planet, and the films are the third-largest grossing film franchise.

Everyone has a favourite Harry Potter Character, and every true fan needs a matching Mug. 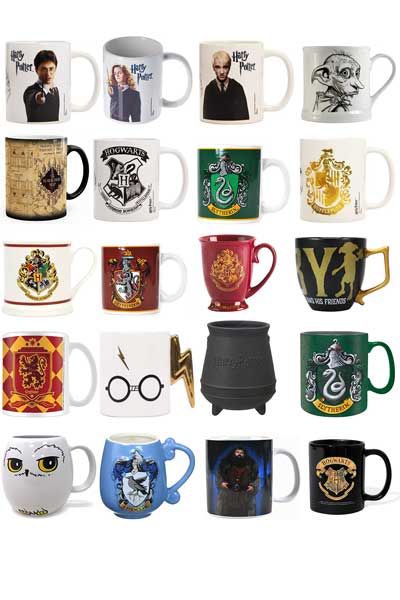 Harry Potter – Harry Potter finds out he is a wizard on his 11th birthday, the hero who in the end, saves Britain from the evil Voldemort.

Hermoine Granger – Hermoine is Harrys best friend, a reliable and trustworthy character who assists Harry throughout.

Ron Weasley – Harry Potters other best friend who helps with the many challenges faced.

Neville Longbottom – Famous for saying “Why is it always me”.

Dobby – Elf servant of the Malfoys who turns to help Harry Potter.

Voldemort – The main antagonist in the series.

These are just a few of the characters available on the mugs there’s more. There are also other designs featuring crests such as Hogwarts, Slytherin, Gryffindor, Hufflepuff and The Marauder’s Map.