Captain Phasma looks like a chrome Stormtrooper the name was inspired by the ball from the 1979 film ‘Phantasm’ Captain Phasma is female and commands the first legion of Stormtroopers, and that is all the information that is available (at the time of writing)

The mug is shiny chrome (just like the Captain herself), and white inside on the front is Captain Phasmas mask in black. 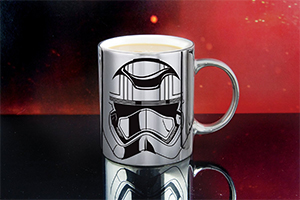