Captain Phasma is a female Stormtrooper who appears in The Force Awakens and The Last Jedi. Phasmas Stormtrooper armour looks very medieval. She wears the cape of the First Order command. Phasma leads the Stormtroopers with Kylo Ren and General Hux in the Cold War against the resistance.

A range of shiny mugs has to compliment Captain Phasma’s shiny armour.

The first Captain Phasma Mug is a chrome plated mug with Captain Phasma’s helmet in black. Do not use in the microwave or dishwasher. There is also silver and black 3D mug constructed from moulded ceramic.

Disney has also released an iridescent mug. Gold and purple with a portrait of Captain Phasma on the back and a helmet close up on the front.

The first features a brushstroke image of Phasma with The Last Jedi logo.

The next one has Phasma holding her blaster and her name written in black.

Finally, there’s a giant 560ml mug of Captain Phasma in battle alongside some Stormtroopers. 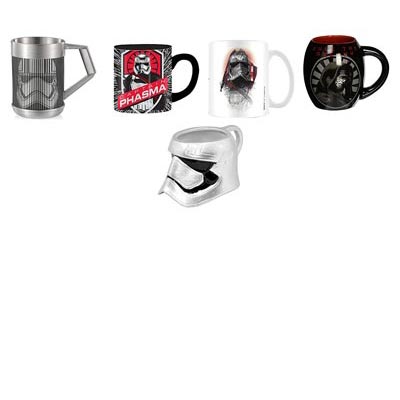