To celebrate the closing of Doctor Whos 34th series we have a range of 3D Doctor Who mugs to review.

This one is a 3D mug of the Sixth Doctor. The Sixth Doctor was played by Colin Baker who was more colourful and exciting than the previous 5 Doctors with an unpredictable, explosive personality.

Colin Baker played the part of the Doctor for three seasons between early 1984 and late 1986 and was later replaced by the Seventh Doctor Sylvester McCoy.

Some hardcore fans say that Colin Baker was the most impressive Doctor out of all 12 actors to have played the part if your one of those hardcore fans who think this here is the ideal mug for you.

This is a mug of Colin Bakers head featuring his notorious bright raincoat; this mug could also be classified as a toby jug.

The mug is ceramic and boxed. 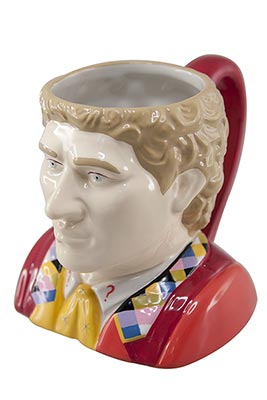