Our reviews on Retro Games Mugs would not be complete without the legendary Donkey Kong, so here it is.

In the original primitive game, Mario had to navigate steel girders and ladders to get to the top to rescue the lady at the top who was being held captive by a huge gorilla called Donkey Kong.

There have been numerous versions of Donkey Kong since the original and Donkey Kong himself appears in various Mario games.

Here are a few Donkey Kong mugs to add to your retro games mug collection. 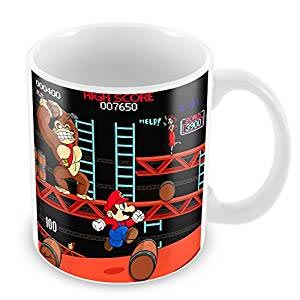