Are you London lover? Or do you want a London inspired gift for a close friend or relative? Dunoon has you covered with a lovely range of highly detailed London mugs.

Based on Dunoon’s famous Glencoe design a tall, large capacity mug with a 400ml capacity that has a handpainted print featuring all the famous landmarks including Buckingham Palace, The Shard, St PAuls Cathedral, The Gherkin, The Eye, Nelsons Column Tower Bridge and More. Royal Guards are also peppered in between the attractions for maximum London effect. A London Bus inside the mug finishes off the design.

This Argyll shaped mug has a lovely picture of a smiling palace guardsman holding the union jack flag and “London” written in gold writing. 2London is also written on the handle in blue and on the inside of the mug along with a side view picture of a Guardsman marching with his rifle.

A print of London icons on a Bute shaped mug, the icons include 3 Guardsman (Red, Blue & black) a Beefeater, a Black Cab, St Georges Cross, The Union Jack and a London Bus, A Bus is also included on the inside. Finished with a patterned handle.

The Glorious London Mug has a blue background with “London” in big red letters along the top, Black and white images of Big Ben, St Paula Cathedral, Nelsons Column, The Tower Of London and more are printed on the mug and finished with a red Double Decker Bus which really stands out amongst the landmarks. The inside features a small image of Marble Arch. Cairngorm shape.

Another Glencoe shaped London mug with elegant paintings of Tower Bridge, A Guardsman, A Red Post Box, A London Bus, The Royal Standard Of The United Kingdom Flag, The Tower Of London, Big Ben, The Eye and more little features here and there. Every image is accompanied by a brief description and some history.

“A horse-drawn omnibus was the first public bus service which commenced in London in July 1829 and paved the way for the first motor bus.”

“The changing of the guards at Buckingham Palace takes place daily in an impressive ceremony in front of the palace.”

“The millennium Ferris wheel built beside the River Thames takes around 30 minutes to complete a full 360 rotation.”

A colourful map of London with all the famous and less well-known landmarks, Glencoe shape 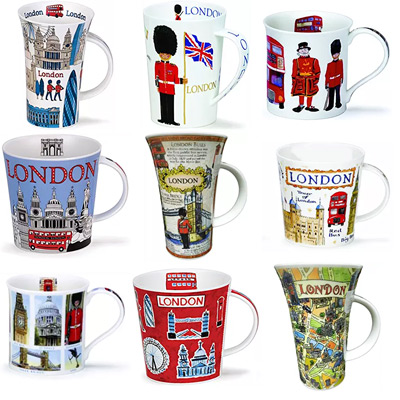