The Dunoon Wines mug is a very large mug and features lots of Wine related images along with passages of descriptive text about wine such as.

“In 1979 Father Junipero Serra planted the first Vineyard in California and had been called the Father Of Californian Wine.”

“Records Of Wine drinking originate from Mesopotamia between 4000 and 6000 BC Texts from the tombs of Ancient Egypt show wine was drunk by priests and royalty from 2700BC, but the wine was introduced to Europe with the spread of the Greek Civilisation from around 1600 BC.”

These are just a couple of examples it would take about half an hour to read the entire mug, Seriously.

This mug is ideal for the wine lover.

The mug is made from Bone China has a large microwave capacity and is microwave and dishwasher safe. 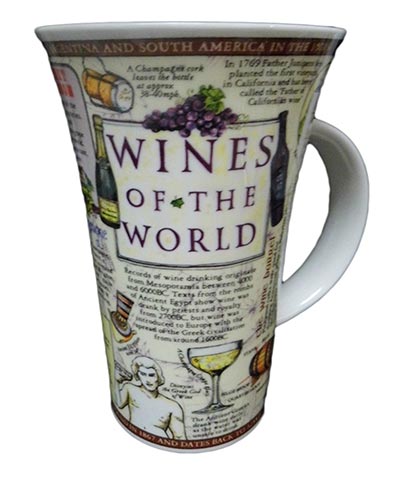