Halloween wouldn’t be Halloween without pumpkins, so there are lots of Pumpkins on the Emma Bridgewater Halloween Mugs.

The Polka Halloween Mug uses the same colours and style as the famous Polka Dot design but with pumpkins instead of dots on both the exterior and interior of the mug. The pumpkins are coloured red, blue, yellow and two shades of green.

The latest Halloween mugs feature pumpkins in traditional orange, some of which have been carved with scary faces. Bats, crescent moons and green foliage are included in the design for a traditional Halloween feel.

Pumpkin carving originated in Ireland where parents would give their children treats to carve scary faces into pumpkins which were then put on doorsteps to scare away evil spirits one of which was known as ‘Stingy Jack’. Now you know where the name Jack O’ Lantern came from. 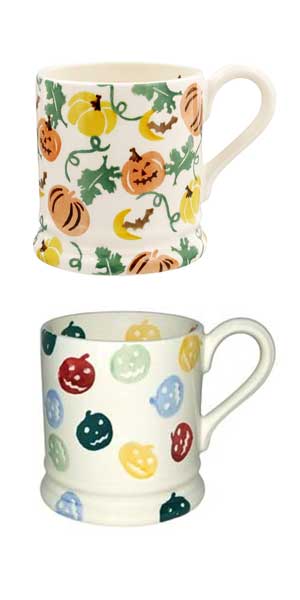