The Emma Bridgewater Henry VIII Mug is steeped in history, celebrating one of our most famous kings and his six wives. The mug features a detailed hand-painting of Henry himself standing in front of the gates of the notorious Tower Of London (where Henry’s wives Anne Boleyn and Kathryn Howard were executed).

The back of the mug features a list of henrys wives, their time as wives and their fate.

The middle of the mug features ‘The Feild Of Cloth Of Gold’ a historic tournament between King Henry VIII  and King Francis I (the French King at the time) which took place in June 1520. 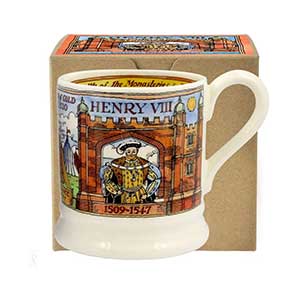