The Emma Bridgewater Puffin Mug is constructed from English Earthenware and adorned with a row of Puffins on the outside and ‘Puffin’ wording on the inside.

There are three species of Puffin the ‘Atlantic Puffin’ found in the North Atlantic ocean, the Tufted Puffin and the Horned Puffin both located in the North Pacific Ocean.

All have large beaks of bright colours that distinguish them clearly from other forms of seabird. Puffins catch their food by diving into water, friendly creatures who inhabit large colonies.

The Puffin is on the decline and here in the UK is on the Red List of Conservation Concern, let us celebrate this lovable bird with this mug. 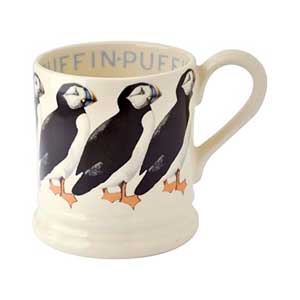