On the 23rd April, The Duchess Of Cambridge Kate Middleton gave birth to Prince Louis. The royal couple’s third child and fifth in line to the throne.

The day after the baby’s name was announced amid gun salutes and the bells of Westminster Abbey.

The Royal Baby Mug ‘s decorated with a blue pattern, a crown and heart.

One side reads “It’s a prince” the other reads “Hooray For Louis” a line of little hearts circles the inside of the mug.

Blue rim, made from English Earthenware 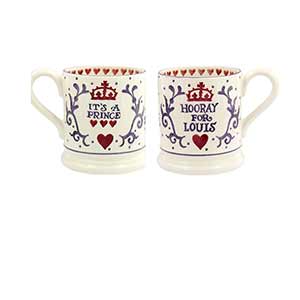