William Shakespeare is regarded as the greatest ever English play writer, poet and actor.

During his life, he wrote 37 plays and 154 sonnets

Shakespeare’s most famous for legendary plays like Romeo & Juliet, Macbeth and Hamlet, but he did far more than produce plays.

Few people realise the effect Shakespears work has had on shaping the English language we all talk and how we write today.

In 2016 Emma Bridgewater released The Shakespear Mug to commemorate the 400 year anniversary of Shakespeare’s death.

The mug features a hand painting of the man himself with 1564-1616 below (year of birth and death) on the mug and the base. 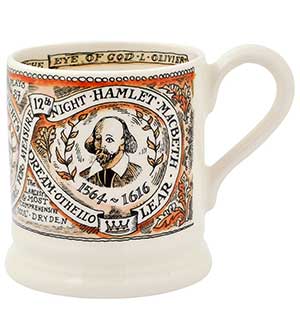