The Ewoks added cuteness and fun to The Star Wars Trilogy. First appearing in The Return Of The Jedi. George Lucus wanted a primitive tribe to aid in bringing down the Galactic Empire. Short and small hunter-gatherers that live in Bright Tree Village. High up in the trees in the Forest Of Endor. Ewoks might be small but they are very strong especially in numbers. They certainly gave the Stormtroopers a run for their money.

The first Star Wars Ewok mug is the Save Ewoks Mug which features a cute picture of Wicket. Wicket’s the most famous Ewok. He bumped into Princess Leia in the forest of Endor and took her back to the Ewok village. Mug’s written with the message “Save Ewoks Protect The Forest”.

The Wicket Forest Of Endor Mug has a black and white illustration of Wicket surrounded by the forest of Endor. and also includes the Death Star (in the sky). The Death Star Shield and the Emperors Shuttle.

If you like some comedy, there’s the Ewoks Revenge Pop Culture mug. A picture of Wicket with Jar Jar Binks’s head on a stick.

The Wicket & Yoda mug which features both characters in various dance positions.

Finally, there is the Ewok Sillohette Mug with a silhouette Ewok print on a standard size white ceramic mug. 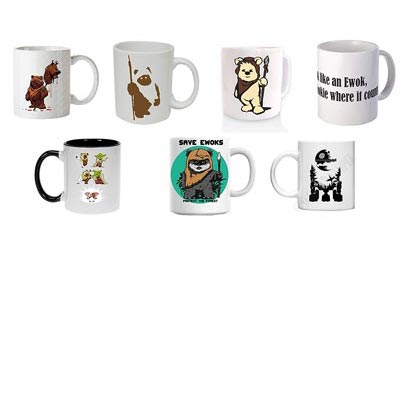