Kylo Ren was born one year after the Battle Of Endor. The child of Princess Leia and Han Solo he makes his first appearance in The Force Awakens. Ben Solo becomes Kylo Ren after he’s tempted to the dark side of the force by supreme leader Snoke. He becomes the supreme leader of the first order. Kylo Ren’s ambition is to become the next Darth Vader and finish the Jedi once and for all.

The first Kylo Ren Mug’s a stylish black mug with an image of Kylo Ren in a threatening pose. Kylo’s pointing with an outstretched arm and his light sabre in the same direction. Also available in white.

There’s a heat change mug which has Kylo Ren standing in a calm but menacing manner. His lightsabre comes to life when you add hot water.

The next mug has a picture of Kylo Ren with lightsabre drawn with a band of Stormtroopers. A standard microwave and dishwasher safe ceramic mug.

The Pyramid International Kylo Ren mug’s white with an unmasked Kylo. Walking with his light sabre drawn. The background has his mask and the First Order insignia. The foreground has “Kylo Ren First Order.”

The barrel-shaped Kylo Ren mug which has a close up of his mask on the front and “Kylo” written on the inside. and

For a more complex shape, you can choose the tapered mug which tapers in towards the top. The mugs black and have Kylo Ren holding his lightsabre in front of him on one side while pointing his lightsabre on the other side.

The 3D Mug a 3D sculpture of Kylo Rens helmet in black and silver this mug is officially licensed and gift boxed. 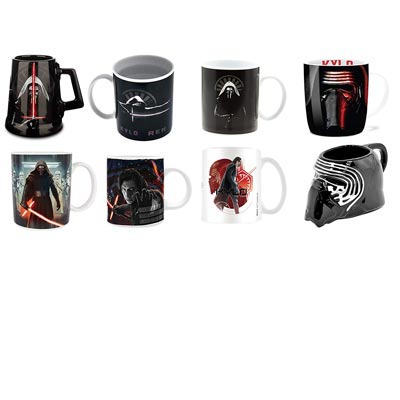