Obi-Wan Kenobi a legend of a Jedi Master and a General of The Republic Army. During the Clone Wars, he defeated Dart Maul (the first Jedi to defeat a Sith Lord in over a thousand years). He trained Anakin Skywalker before he turned to the Dark Side and became Darth Vader. The Obi-wan’s final role was to mentor Luke Skywalker. Darth Vader kills Obi-wan in a dual on the original Death Star.

One of Obi Wan’s most famous quotes was “This isn’t the droids you’re looking for”. This mug has this quote around a black and white side view artwork picture of Obi-Wan Kenobi’s face.

The next mug features a colour illustration of the younger Obi-Wan light sabre drawn. The backgrounds of various other Star Wars characters. The image’s printed on both sides of the mug.

For those who like the older Obi-Wan. A mug with a colour photo of Obi-Wan complete with a light sabre on the Death Star. Before his fight with Darth Vader. Another mug’s available of the dual itself. Before Obi-Wan’s struck down by Darth Vader, tilt the mug and watch them dual! 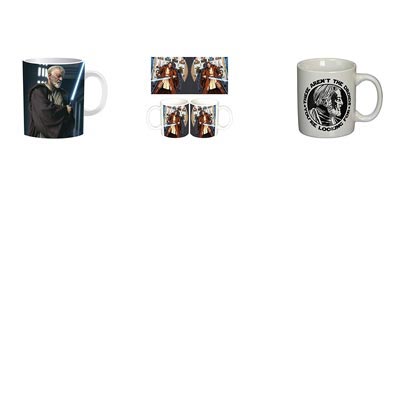