Sin City the awesome black & white (with cleverly added elements of colour) film based on Frank Millers classic comic book series, Sin City has a cult following, and here we have some Sin City Mugs for the hardcore fans.

A white ceramic mug with the title over a black and white picture of Marv in the rain. Marv goes on a killing spree after he awakes to find Goldie dead next to him,  Marv kill his way to the truth before enacting his revenge on Kevin and Cardinal Roark.

Another Sin City 2 A Dame To Kill For Mug is available featuring all the above characters except Nancy.

Sin City A Dame To Kill For Marv Mug

A white ceramic mug with a black and white picture of Marv standing in the rain with a shotgun over his shoulder. Marv helps Nancy get revenge on Senator Roark for Hartigan’s death. 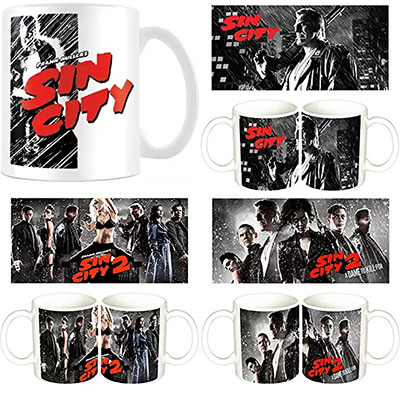