You are here: Home / Game / Sonic The Hedgehog Giant Mug

Remember Sonic the Hedgehog? When Sonic Hedgehog first made an appearance in 1991 on the Sega Megadrive it was the fastest game to have ever been invented.

A Blue Hedgehog running along at high speeds destroying opponents by spinning and jumping into them, jumping up high on springs and collecting rings.

Back then the game was great to show it to your kids nowadays and they will just laugh at how primitive and slow the game is.

Luckily for Sonic fans, he is still around in newer faster editions on the Xbox 360, Wii and PlayStation 3 and what better way to enjoy playing Sonic than with a giant Sonic mug full of Tea or Coffee.

This mug has Sonic your favourite video game character winking at you on a matching Sonic blue background.

The Sonic mug has a giant capacity is microwave and dishwasher safe and is gift boxed. 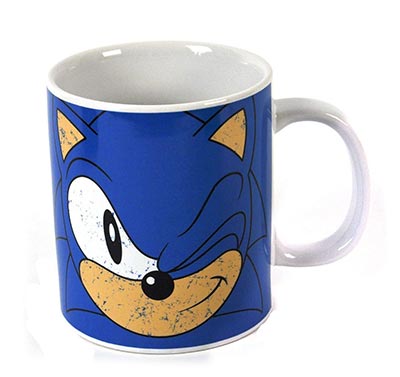