Carrying on with the retro computer games it is only fair that we throw up some Space Invaders mugs.

Space Invaders was inspired by Star Wars and War Of The Worlds and were one of the original shoot em ups.

In the game itself, you control a spaceship at the bottom of the screen, and you have four shields to hide behind.

At the top of the screen are 55 aliens which shoot at you and gradually move down the screen once they have been defeated you are on the next level, and more aliens appear who are faster this time around and as the levels progress they get faster and faster.

Anyway, thats enough of the history if you’re a real Space Invaders fan you are going to want a Space Invaders mug, and we have a beautiful selection for you.

First of all, there is the http://amzn.to/2DzLzOT50Fifty Space Invaders Colour Changing Mug cold this mug is black but add some hot liquid, and the whole Space Invader gameplay appears with the spaceship, aliens, shields etc.

For the purists who want the original colours, there is a black mug with the original green spaceship and white aliens include scores at the top with credits and lives at the bottom.

Next up is a 420ml personalised Space Invaders mug which features a red pixel Space Invaders Alien over a large white mug and space below for any name you want, this mug will make an excellent gift for a retro gamer geek.

Lastly is the Alien Invader Pixel Art mug which features a black pixel alien on a brilliant white mug which is dishwasher safe and has been made in the UK. 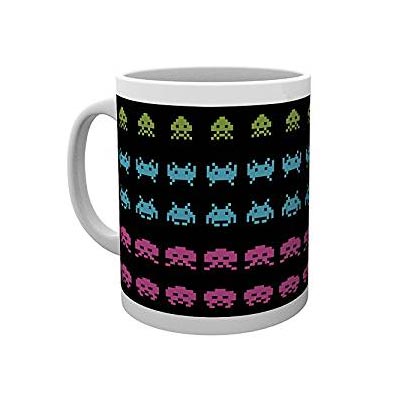