You are here: Home / Film / Star Wars mugs from Moonpig

That “Moooonpig.com” song might be very annoying and stick in your head all day (like it’s designed to do by some very clever marketers) but Moonpig is actually an awesome company that saves you a lot of time and hassle when it comes to birthdays, Christmas, and any other occasions that require sending a gift.

BB-8 is an astromech droid from the coming Star Wars film ‘The Force Awakens’ BB-8 toys were released a few days ago, and they sold out within one day! This design features a picture of BB-8 with the words ‘Happy Birthday [INSERT NAME]” and a picture of the recipient.

A Star Wars comic strip printed on a mug with a box for a photo of the recipient, the comic strip features X wings, Darth Vader, Stormtroopers, Luke, Leia, Han and Chewie.

Hero Of The Galaxy Personalised Mug

Features old and new characters of the Star Wars Trilogy including C3-PO, R2-D2, Chewbacca and BB-8 with the words ‘[INSERT NAME] hero of the galaxy’ and recipients photo.

It’s not wise to upset a Wookie Personalised Mug

Rule The Galaxy On Your Birthday Personalised Mug 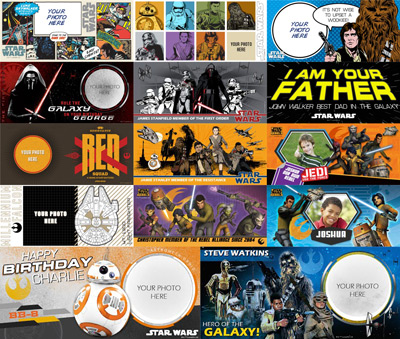 Features the words ‘Millennium Falcon’ space for your photo and a technical diagram of the fastest ship in the galaxy.

I Am Your Father Personalised Mug

features the words ‘I AM YOUR FATHER’ [INSERT NAME] BEST DAD IN THE GALAXY. All words in Star Wars opening title style.

Features picture of The Force Awakens Sith Lord and Storm Troopers with the words [INSERT NAME] member of the first order.

Member Of The Resistance Personalised Mug

JEDI Use The Force Personalised Mug

With words [INSERT NAME] our little rebel and JEDI Use The Force with a picture of rebels from the new The Force Awakens film.

Features cartoon pic of JEDI’s and Droid space for a photo and personalised name.