In our retro video game mug series, we have so far had Manic Miner, Space Invaders, Pacman and Donkey Kong.

Some of your favourite classic games printed on a mug but the series is far from complete, so today we have mugs of probably the most addictive game ever Tetris.

Tetris originated in Russia believe it or not and was named after the Greek numerical prefix ‘Tetra’ something to do with the four blocks that are thrown down at you in seven different random shapes which must be formed into lines going across the board.

Once a line is formed it disappears if the blocks stack up to the top of the screen game over as you progress through the levels the game gets faster Tetris is never ending and possibly even infinite.

Tetris has been voted the best game ever, and unsurprisingly many mugs have been released for the true Tetris fans. 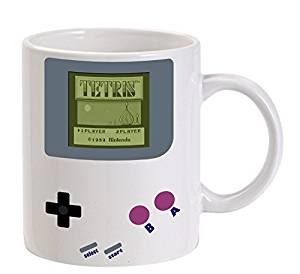