You are here: Home / Film / The Human Centipede Mug

The Human Centipede trilogy is probably the most disturbing trilogy ever, and as such a mug of the sickening films just had to be created. Incase you have been living under a rock for the past few years…

In the 1st Human Centipede 2 American ladies and a Japanese gentleman get captured by a twisted doctor and get sewn bum to mouth creating a human centipede, although the concept was disturbing the film was actually that not.

In the 2nd Human Centipede film, a sexually attracted fan of the 1st film hires a warehouse, captures ten people and stitches them together bum to mouth. The 2nd film is realistic and disturbing and was banned in the UK when it was first released, a real ground breaking masterpiece

The 3rd human centipede film takes place in a US prison and stars the two previous sickos but playing different roles and this time a centipede of 500 plus people are stitched together, they also create ‘The Human Caterpillar’ The last film is actually pretty silly and a huge disappointment after the 2nd film.

Anyway, for you sicko Human Centipede fans here is the mug, the mug is white and features a green print with a three person centipede logo 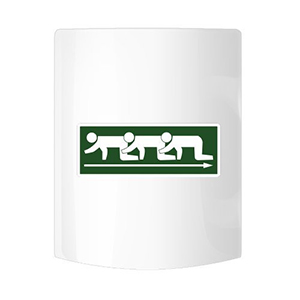