Trainspotting is one of the most celebrated UK films and next year will be twenty years old believe it or not.

Released in 1996 the dark comedy-drama was about a group of Heroin addicts from Edinburgh. No one could ever imagine that a film of this subject matter could be so popular, but it was!

The Trainspotting Cast Mug features the original film poster with the five main characters and in the title area is the famous Trainspotting slogan “Choose Life.”

“It was fucking obvious that that cunt was gonna fuck some cunt.”

“Armed robbery. With a replica. I mean, how the fuck can it be armed robbery with a fucking replica.”

Ewan Bremner played Spud the dim, but like able and innocent member of the friends, the most memorable part of Spuds role in the film is when he fouls himself in his girlfriend’s bed.

Renton played by Ewan Mcgregor is the main character in Trainspotting.

Trainspotting is the film that made Ewan Mcgregor a star.

All this awesomeness on one mug Trainspotting is one of the coolest UK films ever made, and the original photography was equally as cool so why not have a piece of it as your favourite mug?

The mug holds 280ml is gift boxed and comes with a free Trainspotting Coaster! 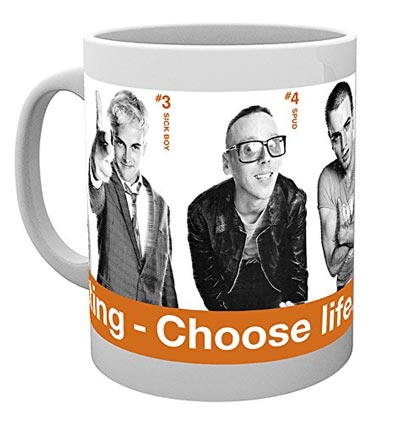