Vikings Mugs are for diehard fans of the ‘Vikings’ TV series, which so far has reached six seasons.

The Vikings TV show was inspired by the Norse legend Ragnar Lodbrok who was actually detailed in the Anglo Saxon Chronicle, a collection of historical documents from the 9th century.

Ragnar Lodbrok was a farmer who raided England and rose to become a Scandanavian king. It seems Ragnar, the star of the show, is especially popular with the ladies who watch Vikings.

If you are one or know a Viking fan, one of these mugs is a must.

The My Viking mug is the ideal gift for your boyfriend or husband. It’s printed with the following message…

“My Viking, you are my favourite Viking, you are as brave as Ragnar, as wise as Odin, as strong as Thor, may Odin give you knowledge on your path, may Thor grant you strength and courage on your way, and may Loki give you laughter as you go, I love you to Valhalla and back, your shield maiden.” 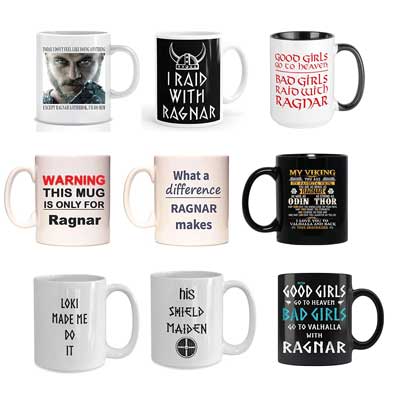